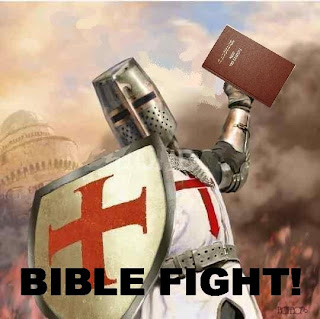 So, I saw a disturbing article on my sister Sobeq's twitter today, about some new vast prayer project aimed at "taking the country back" for christians, sponsored by our favorite Jesus freaks, the New Apostolic Reformation, and while they are against, well, everyone but themselves (because Mormons and Catholics aren't christian either), they are having pagans sit up and take notice. And responding back to pagans - with "blood-covered love." (I wish I was kidding about that quote)

Some of you might remember some rumblings over the NAR during our last American presidential election, mostly around Sarah Palin, our favorite witch hunter. It's a part of an over-arching ideal in some factions of American christian fundamentalism termed "dominionism," basically, "all your soulz are belong to us." It's a relatively new term, describing the political aspirations of far-right christians, but has been on the rise here in the US, as far as I can tell, since Ronald Reagan. The evangelical right is a minority, but a very noisy one, and very faithful to the polls - and they are masters of organization.

What made me want to write about this episode, particularly the "Forty Days of Light over D.C.", is partly the comment section of the first link to the Wild Hunt blog about it, and my own mixed-up feelings. I'm no stranger to the feelings of these kinds of people, who feel it is their duty to force their god's "love" on us, as well as their god's laws and spiritual dominion, to make sure we're "free" and "saved." I have always chaffed at this kind of "love", and know it does not really come from compassion, but from deep insecurities covered by a kind of haughty surety of their own "righteousness." I try to have my own compassion for them, but at the same time, know that there is really no talking to them. They are convinced I'm an emissary of the devil. Nothing I say would be considered for a moment.

I do worry that these nutters will gain political ground - for that, I vote. However, the mention of their prayers against their enemies and "pagan idols" such as Columbia (notice that D.C., to them, is the "District of Christ"), and ongoing commentary on the power of intent (even admitted to be a force by the NAR themselves - the irony is delicious), do make me pause and think. I fully believe in magic/heka. I employ it, I live it (as best I can), and I don't think it is limited to a few specialized hands. I believe it is a natural force - one that can be honed, specialized, and used more specifically and effectively by practiced people who have put the time and effort into it, yes; but a stick can be used to kill a person, not just a balanced sword. What can an organized group of wall-eyed praying foot-soldiers do, with enough directed intent/malice/misunderstanding, to disrupt a government that ensures my freedom? What would it take to counteract it?

Please understand, I dislike the whole notion of "spiritual warfare" as put forth by these neo-pentecostal types like the NAR. I don't think it's helpful to announce "we are against you, and our god(s) is(are) too!" I don't want to drag anyone, least of all myself, down to their level of "my god can beat up your god." (Though I do think I just heard Set snicker somewhere...)

However, in the interest of balance, ma'at, and well, concern for our country not getting any crazier, I do think I will try to save the date (11-11-11, oh, but magic is evil :P) and say a few prayers to Ma'at and perhaps the genius loci Columbia. It couldn't hurt, and it might help add a few feathers on the scale on the side of keeping my country free. Maybe my fellow American pagans/Kemetics/Vodouns can jump in as well - there are days for every state, and the one for the District of Columbia.

How you respond, and the level of it, is entirely up to you, but I think perhaps quietly, privately, and lovingly might be best. Maybe do what Jesus said, and go into your closet - because these guys are certainly ignoring that part of their book.
Posted by Qefathethert at 6:31 PM