Gotta put some feet up under these prayers! 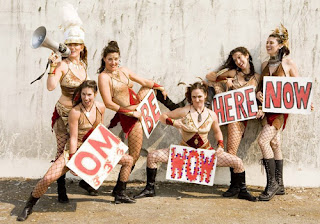 Courtesy of the Shamanic Cheerleaders
In my discussions about my spirituality, or politics, or the state of the world, some people claim you "just have to pray to God." Now, I would never disparage prayer, since it's something I do, just mostly not to the deity that most people around me talk about. Then there are the materialist atheists, who scoff at all prayers, and say it's only a way to feel like you're doing something when you're doing nothing.

I tend to fall in the middle. While I fully believe in the power of words, I do see that following through with action is the best thing to do in a situation. Prayer, to me, is a conversation with the soul, or even larger powers, where actions may be worked out.

Apparently, I'm not alone in this idea. I recently watched a film three times that is all about this very concept. It is Fierce Light: When Spirit Meets Action, by Velcrow Ripper. It is a gorgeous film, but I won't say that it's easy to watch. It is heartbreaking at times, but it is honest, soulful, and amazing. Not only does it feature such luminaries as Thich Nhat Hanh and Archbishop Desmond Tutu, but one of my favorite modern, lovely, glittered and rose petal covered fire eating angels, Sera Beak. She's a self-described spiritual cowgirl, a lovely writer, and every woman should read her stuff. In my opinion.

In any case, this film makes me want to get a heart chakra tattoo on my breastbone and storm city hall - I want to travel to Africa, plant millet, and dance to their drums, and ingest iboga root. I want to weep and then build schools for girls in Afghanistan.

I value heka, but I still believe one must act to make this world a better place. And I think the Gods would agree.
Posted by Qefathethert at 1:09 AM